I wasn’t the only one to be excited about this sequel, and unfortunately, I’m not the only one who has been fairly disappointed in it as well. Â While Diablo III has some great features and cinematics, the game feels a little hollow from a general lack of content and challenge.

Online games are great. Â I love ’em. Â I’ve been playing them for 16 years.

But when the hell did developers decide that single-player games should also rely on a connection to a remote server across the web? Â  Diablo III connects you to the Battle.net server every single time you try to play the game, so it isn’t something you can do for distraction when the internet is down or when Blizzard takes their servers down for weekly maintenance on Tuesday mornings. Â If you have a laggy connection or you’re trying to stream too much video at the same time, you can see some significant latency between 100 and 300 ms.

The annoyance of lag is one thing, but for some players it has led to an outright ban from the servers – and a loss of their game. Â It turns out that Blizzard is taking a hard stance on what they mean by supported operating systems, and a whole bunch of Linux users just found out the hard way. Â Since there is no offline mode, those who Blizzard decides to blacklist from Battle.net will just be left empty handed – and $60 poorer.

Diablo III plays steadily – even on my PC. The graphics are toned down a bit, but battle is mostly a chaotic clash of colors and lights anyway.

What about the actual game?

Oh yeah… Diablo is a pretty standard hack-n-slash style of dungeon crawler. Â There are some elements of the roguelike gaming styleÂ like randomized dungeons, but hardcore mode’s permanent death is always optional. Â  The graphics are a little bit updated and the environments are a tiny bit more interactive, but there isn’t a lot that is remarkable about the game play. Â You kill the monster, you take the loot, you sell the loot, and you use the money to buy some loot that you would actually want to use (which is about 1% of the magical drops in the game, from what I can tell so far.)

In between trips to sell loot, some unremarkable NPCs will tell you about the various quests you are working on. Â The plots and characters are incredibly generic and transparent, and questing mostly fails to convey the epic scope and urgency of the story they’re trying to build up.

Fun, but without the challenge

The first time through the game is incredibly easy. Â Powerful armor and weapons are available at relatively low prices for low level characters. Â Grab a few rare items and watch as entire waves of mobs crumble from your single right click. Â Quite often, a boss fight would come and go – and the only way I realized I’d killed something with a name was the pile of rare gear and the notification to my quest log. Â There was one boss fight that involved running around frantically on a surface of blasting flames, but the rest were pretty forgettable.

Playing multiplayer mode is quite convenient, and the game definitely gets some points for that. Â It is VERY easy to join a game with someone, share quests, trade loot, and teleport to the other character’s location. Â If you and a friend or two want to log in for some quick hunting, it is a great game to go to.

After casually playing through for a few hours, maybe ten or fifteen, you’ll realize that you just killed Diablo and beat the game. Â Sort of. Â Just as soon as that last epilogue video stops playing, your character will be booted right back to where you started at level one. Â Except this time, everything is a little bit harder.

In that fashion, Diablo III recycles about 10-15 hours of actual game content three or four times. Â After “normal mode” you will be about level 30 and entering “nightmare” mode. Â When you conquer that, you’ll be about level 50 and entering “hell” mode. Â If you beat hell, you might actually get to max level and unlock the “inferno” difficulty setting. Â I’m just not sure why I’d want to bother since I’ve already seen all of the levels and plot in the game…

At one end of the spectrum, normal mode is ridiculously easy. Â You pretty much have to go afk to die. Â By inferno, two hits in a row will kill you and there isn’t much you can do about it but try again or buy some better armor from the real-money auction house. 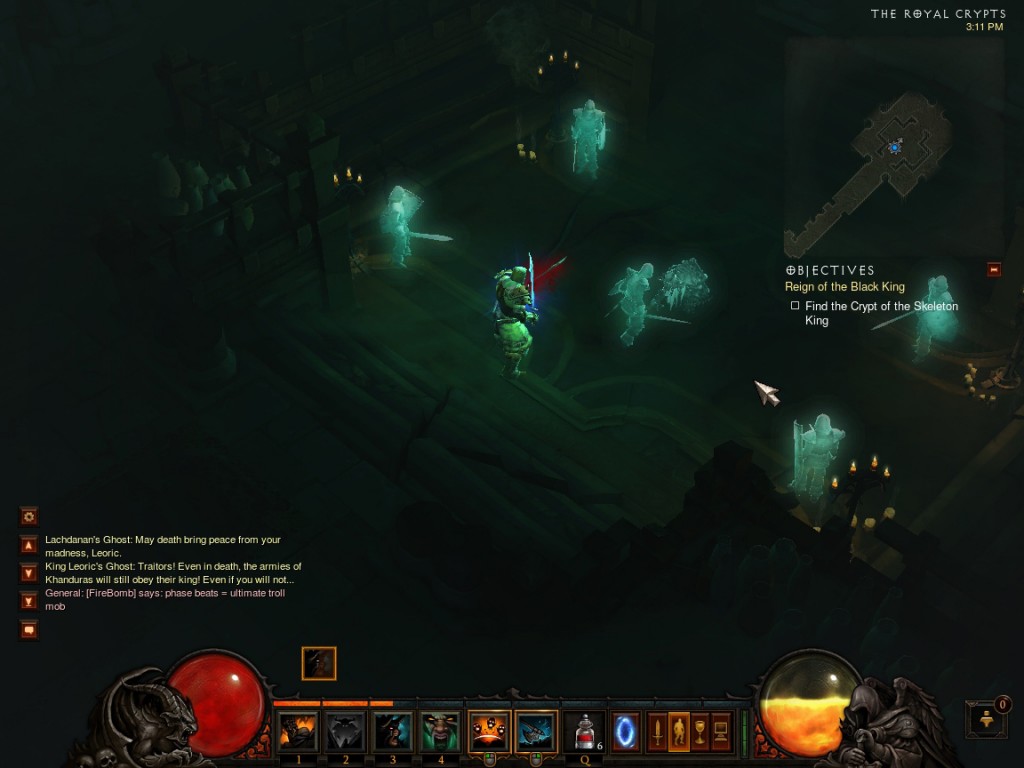 The best part of the game is probably the few minutes of animated cinematics that play in between Acts and after defeating Diablo. Â I tend to click through cut scenes on most video games, but these were actually done very well. Â I won’t give out too much information here, because that would be the best part of playing through the game and I’d hate to spoil it. Â On the other hand, you could find them all collected on Youtube and save yourself the $60 and ten hours.

Now… if those 15 minutes of animation were clips and trailers for a Diablo movie, it might be one of the coolest fantasy/action movies in years. Â Otherwise, it is a very generic game with very little unique content and an elaborate system of tempting you in to playing it over and over again. Â Overall, I kind of wish I had saved the $60 and put it toward an SSD drive or a new phone.