So I’m pretty late to the game but I finally picked up a copy of StarCraft II. While the game is very similar to the original Starcraft real-time-strategy game that was released about ten years ago, it is a welcome update and expansion on the series. Now that I’ve been playing it way too much for the last two weeks, I’ve finally convinced myself it was time to break away for a few moments and write a review. 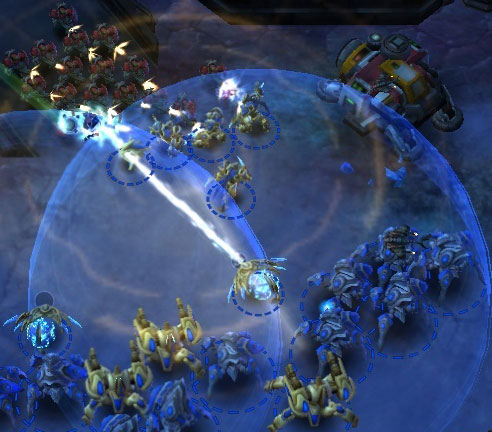 Starcraft is a fast-paced game of strategy that pits you against online opponents. Well, there’s a single player campaign mode as well, where you can fight against the computer and watch a story unfold, but I’ve pretty much skipped that and gone straight to the real challenge: other Starcraft players.

As you play, you control one of three alien races: Protoss, an ancient technological race; Terrans, the human team; or the Zerg, a bug-like critters that swarm and corrupt the land. Each race has its own set of buildings and units, so although the general gameplay is the same for each player, there are unique strategies and combinations of units that will win for each race. Knowing how to play one doesn’t necessarily mean you can switch over to the other!

Buildings are at the heart of your military encampment. Â You’ll start off with a command center, Nexus, or hatchery depending on which race you select. Â You’ll also have some worker-type units that can collect resources and build new buildings. Â As you gather those mineral and vespene gas resources, you’ll be able to construct the buildings that create new military units, allow you to build upgrades to existing units, or perform special functions on the map like sensor sweeps.

Military units come in many varieties, from the individual infantry to massive flying fortresses and oversized bugs. Â Some units fly, and some burrow. Â Some can only attack other ground units from close up, and others can fire at flying units from a range. Â Each unit’s particular capabilities and strengths is set, so it is important to know their abilities, weaknesses, and adjust your own strategy according to what you see of your enemy’s.

Many wars are determined simply by who can build the most units first. Â A good opponent will strike early and strike often, and if they’ve collected more resources and built structures more efficiently they will eventually just overwhelm your defenses. Â However, that isn’t to say that all combat is won purely by the size of an army!

The terrain also plays a pretty big role in SC2. Â Many areas are separated by ramps and differing altitudes. Â From up top, you can usually get a better view and better range on units you’re attacking below. Â And unless the invader has some troops on top of the cliffs (or a flying unit who can see over them) they won’t even be able to tell what is shooting at them! 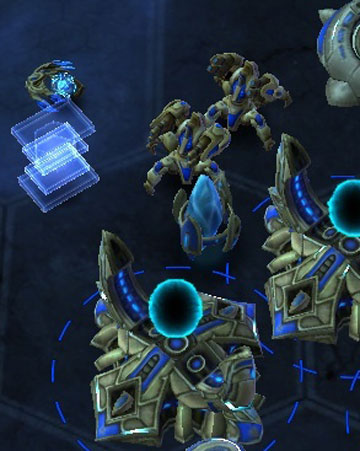 Further, some units have natural advantages against others. Â The Protoss Immortal has powerful shields that can protect it from Terran units like the Siege Tank or Thor, and it also has specialized guns that rip right through armored enemies. Â However, if surrounded by a horde of cheap zerglings, it will have a hard time shooting them all down before those shields collapse.

In many cases, an inability to hit flying units can result in a massive defeat. Some troops like Zerg roaches can deliver a lot of damage to ground-based units, but just a few Void Rays or Wraiths can rain down damage from above.

Unit speed and mobility is another factor that comes in to play here. Mutalisks fly and they fly fast, so it is pretty easy to circumvent a player’s defenses and attack the weak side of their base. By the time your troops come around from the front gate, the mutalisks might have already gone and left nothing but destruction.

If you’re playing online against other human players, you’ll have to play some ranking matches so Blizzard can determine exactly where to put you on the ranking ladder. From there, you’ll automatically be matched to face up against folks who are roughly in your same range of skill. Of course, sometimes you’ll still get to play against those who are significantly better or worse than you are, but the amount of points won or lost in those matches is also offset a bit to balance out the expectations. Think of it like having a bit of a buffer against a bad run!

Starcraft 2 is pretty much the perfect game for those enjoy strategy at high speeds. If you like chess, but wish you had a factory mass-producing pawns for your onslaught, then don’t make the mistake I did and miss out on any more time without this title. I have to give it a solid 4 and a half out of five stars, and my only complaint is that a game can take a little while to get going just to be decided in about a minute or two of actual combat. Other than that, it is well-balanced and I’m still shocked by new strategies and twists that surprise me after playing for nearly two months. As I get better at the game, my ladder ranking automatically adjusts and puts me up against new challenges I’ve never encountered before. And just as soon as I master that, I am introduced to yet another level of competition…

Ok, there is a lot more that could be said about this game, but right now I really just want to get back to playing! See you online at Battle.net!