Living in Florida, you get sort of accustomed to all kinds of bugs and creepy crawly things. But I never expected I’d feel sympathy for a wasp.

This injured little would-be killer found his way in to our bathroom last week, and for some reason I thought it would be a good idea to grab my camera and get up close.

A strange thought entered my mind: Wasps always get a bad reputation, but for all the close encounters I’ve had none of them had ever actually tried to hurt me, personally. Instead of feeling like I needed revenge against a violent intruder, I started thinking like I had an injured & lost guest in my house.

What I did next was probably the height of insanity, but I decided to give the guy a lift on to an alumni magazine & cap him off with a big plastic cup. From there, I managed to bring him outside, where he curled up in a paralytic coma for a while before slowly walking away. 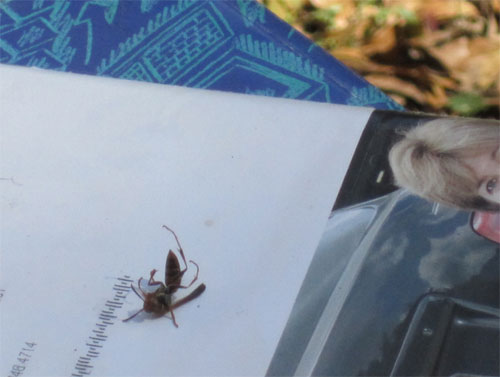 That was the last I saw of him, and it probably wasn’t too long before the ants & other bugs exploited his vulnerability. I was still glad to give him a chance – or at the very least, I was glad to have him out of the house without anyone getting hurt.