Whatever was eating up the cubanelle pepper leaves seems to have been chased off.Â  There was an empty pot gathering water for the bugs to multiply in, but I flipped that over and brought in a potted lemongrass plant to discourage loitering bugs.Â  After losing two plants in four nights, it seems to be working just right because the last two nights haven’t brought any extra damage.

Unfortunately, the peppers were saved just in time for all the tomatoes to come crashing down. 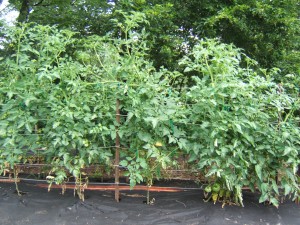 How they're supposed to stand up

We planted some tomatoes last year and actually got a little bit of fruit off of them, but they were planted pretty late in the season and we figured that as long as they had more time in more direct sun they would even more successful.

There’s just one thing we didn’t really account for – by moving them in to the more direct sunlight, we were taking them away from the deck railing that they’d used to grab on to as they grew taller and taller.Â Â  The long side of the rail only faces the sun for a short time each day, so they had grown around the side and tried to squeeze on to the one foot of deck rail that does face south.

Anyway, now they’re in a nice plot that gets lots of sun until 1-2 pm and a little bit more after 4 – but we never got around to putting in any sort of proper support structure.

So if you’re more experienced with tomatoes than I am, you know exactly what happened.Â  They got too top heavy and they simply can’t stand up straight any longer.Â  Of course, the white hairs all over the vine can actually root itself in to the soil and deal with crawling all over the ground, but we’re starting to get in to the heavy rainy season and there’s a lot of reason to fear rotting on the leaves and stems.

Now, the whole goal of this gardening project is to get as much food as possible for the least amount of financial investment.Â  So far, we’ve spent about $50 on some blocks to mark off a garden area and we’ve spent another $20-30 on some soil to build up the nutrients and height of the garden floor.Â  With another $10 of seeds and $5 worth of plant food, we’ve managed to get about 60 plants started for less than a hundred bucks – and most of those costs won’t repeat next year.

The trick then, is to figure out some kind of cheap way to hold up the tomato vines.Â  At the moment, they’re lying on some plastic milk crates but we’re looking at possibly setting up a wedge-shaped structure from some bamboo rods we have, and wrapping the thing together in chicken wire. PVC might be a cheap material for framing the wire, but vinyl chloride is bad about leeching toxic compounds in to the air and soil – and possibly right in to the plant itself.Â  Metal is expensive & wood might rot (and the wood that doesn’t rot is probably just as toxic as the plastics I’m trying to avoid!)Â  so there are definitely advantages & disadvantages to all the possible solutions here.

I’ll be sure to report back in when the next phase of crisis management is complete – and in the meantime, here’s to hoping that we don’t get too much more rain!

And the (tomato) fix is in! - John McDonald