A tense morning turns to disbelief and groans as officials announced the individual who sparked the lockdown was carrying an umbrella.

Around 10:15 AM on November 16, 2011, police received a call about a man carrying what appeared to be a gun at an intersection between downtown Greenville and the main campus of East Carolina University.

However, speculation on the web ran rampant. The rumors of a gunman on campus turned in to rumors of four gunmen on campus. Someone reported that he was seen getting on a bus and several officers swarmed all of the buses in downtown. As three police helicopters swarmed overhead, the lockdown was expanded to nearby elementary schools and rumors escalated to talk of a hostage situation.

Meanwhile, pictures and reports from students locked up on campus started to leak out as well. At one point this picture was posted to Twitter and people were claiming that the suspect(s) had been caught. 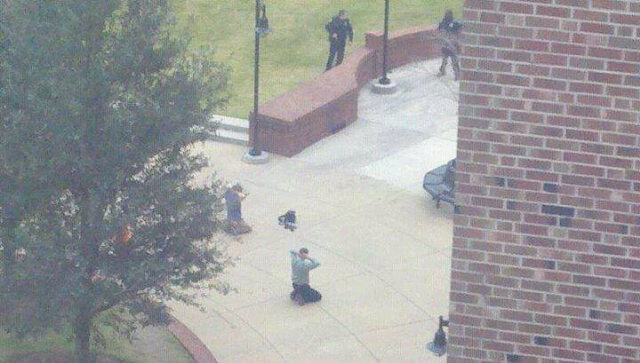 Police officers stop and search ECU students during a lockdown

Around 12:30 PM, the police were apparently listening in on Twitter for information because they began to evacuate and search several buildings named in the online rumors of a hostage situation. After a half hour of playing whack-a-mole with Twitter leads, the search stood down, the lockdown was lifted, and students were sent on their way back home (or to their next class!)

The massive over-reaction to a non-event is emblematic of the mood in our society today. Paranoia runs strong despite the fact that we are relatively safe when compared to historical standards of even just a few decades ago. There isn’t actually more crime, yet we’re bombarded with the worst of the horror stories and thrown in to panic over an umbrella.

Will anyone flinch by the time there actually is a wolf?

Had a great morning, stuck in a classroom for several hours with nothing to do while the campus police, the city police, and the state troopers with assault rifles, helicopters, dogs, shut down the city with swat teams surrounding a house, a small business, and several buses, all searching for a white male with a bookbag and an assault umbrella.