North Korea has been grabbing headlines as usual, and the nation’s recent actions have been described as erratic or irrational. Some speculators have suggested that the leader’s advancing age and failing health has inspired him to the ultimate confrontation, but he is probably instead trying to secure his legacy and the ascendancy of his chosen heir.

Understanding North Korea’s fear of invasion requires a look back on the last few thousand years of the region’s history. Before the Korean war split the peninsula in two, the Korean kingdoms had been invaded by Japan, China, Mongolia – just about any neighboring state has made some attempt at capturing the Korean provinces.

This 19th century cartoon depicts Korea as a fish being hunted simultaneously by China, Japan, and Russia. 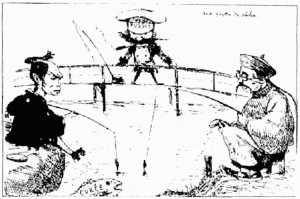 For the Southern Republic, U.S. intervention in the cold war was an assurance of territorial integrity.Â  North Korea similarly enjoyed Soviet protection, but the collapse of the U.S.S.R. left North Korea on its own and in need of a defensive deturrant.Â  While many think of China as North Korea’s natural ally, the relationship between the two is actually rather strained as there are some debates over the historical boundaries that seperate the two cultures and their derivative states.

As iron and uranium are the primary natural resources available in North Korea, it should not be a surprise that these have been utilized as defense.Â  Iron-clad ships originated in Korea, so it should not be a surprise that they have retained the desire to stay cutting edge in their military options.Â  Failure to do so has historically meant a loss of sovereignty and paying tribute to foreign powers.

With a domestic supply of uranium and a history that promotes defensive paranoia, it was probably inevitable that North Korea would develop nuclear weapons.Â  Recently announced tests may have proven a partially-functional bomb, but the actual potency of Pyong’yang’s arsenal is unknown.Â  Kim Jong Il, of course, would like everyone to think they have full nuclear capabilities.Â  Chances are, the intent is to create a defensive deterrent.Â  While North Korea controls a large army and long rang bombing capacity, they have no hope in a direct war against either neighbor.Â  A fight with China or a U.S. backed South Korea would be extremely bloody and destructive on both sides, but even scenario would end with the defeat of North Korea through attrition.

A few months ago, the missile launches, bomb tests, and threatening announcements were gaining momentum.Â  Some people thought he was trying to challenge Obama as a new president, and others suggested he was simply out of his mind.

What didn’t get a lot of coverage before North Korea faded to the back of the news again, was that Kim Jong Il had named one of his sons as a successor.Â  And suddenly after naming an heir, the rocket launches and nuclear bragging seemed to quiet down.Â  So what I see is a public display of power for the purpose of securing a legacy – not the behavior of someone who wants to commit national suicide.

Indeed, the latest announcement was that Kim Jong Il would be re-opening the contested border with South Korea.Â  After decades of seperation, the reclusive state will be allowing travel along the Korean peninsula.Â  Tourism and family reunions are expected to be on the top of the agenda as Koreans seek to reconnect with their own kin and cultural history.

To paraphrase Lao Tzu, a storm or movement that appears suddenly cannot last for long.Â  Conversely, a thousand years of shared language and history is unlikely to remain divided because of fifty years of seperation.Â  Indeed, Korea has spent periods longer than this under outside control.

Kim Jong Il’s heir is his youngest son, a twenty-something with a decent education and a reputation for partying.Â  He may not have the ability or even the interest in keeping the North isolated, and he may realize that the corporate world even more favorable to building family fotures than the current dictatorship.Â  With the borders opening, trade is almost certain to follow.Â  So while I don’t believe the new leader will give up his clan’s prominent position, I do think he will be more open to tolerating a more open and competitive system.Â  Of course, all I can do is speculate baselessly, as the heir’s own words and actions will define the ultimate course of Korean politics.Â  But I will say, that despite all of the saber rattling and threats being exchanged, the actual chance of a military confrontation are falling quickly.