One of my favorite sights to see in an urban environment is the public mural – especially ones that broadcast political and cultural messages. For fans of such public art, the places to see are Barcelona, Belfast, and Derry in Ireland. I’m sure there are more, but these are the cities that made me fall in love with the medium of public art as protest, triumph, and civic engagement.

Why should one go about painting their opinions and histories on a wall?  Well… where else is everyone going to be able to see it?  Broadcast media of the 20th century has been a one-way street:  Those with politically-granted monopoly on airwaves run the televisions stations, and they broadcast daily reminders of what you’re supposed to think and believe.  Before the internet revolutionized the relationships between information production & consumption, public art was one of very few means that could put the power of media into the hands of modest means. 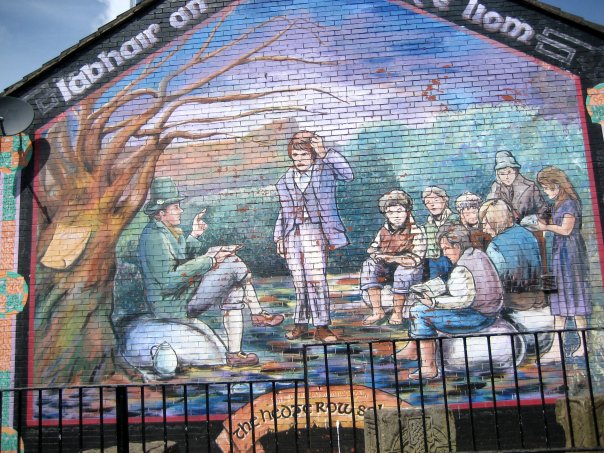 And what could be a better reminder to the importance of information control than the Hedge School depicted here on a home in Belfast? In the 18th century, English laws would forbid Catholics from participating in education as teachers or students.  Every law was already written for the advantage of English settlers, but the crown still sought to solidify its control over the island by keeping its natives in a state of ignorance.  No law or army can forever protect tyrants from a well-educated populace…

Hedge schools started popping up in the 1600s, and they take their name from the rural or even outdoor environment classes were held in.  Despite a lack of school houses, despite legal bans, education went on under a tree or behind the bushes.  Knowledge would be passed on orally, even if the words had to be whispered.

The imperial law was designed to keep wealth and power with one race of men over another.  Opportunity was rationed by who was allowed to eat what, or who was allowed to learn, or which church was allowed to say mass.  Every rule and regulation and job interview was designed to preserve this inherited imbalance of power, and yet education continued to create opportunity for those who were not “supposed” to have it.  Despite the crackdowns – or perhaps because of them – a new generation of rebels and civil rights agitators would rise up in the late 18th century armed with a knowledge of history and other basic academics.

While we may today take the freedom to pursue education for granted, it has not diminished in value.  To the contrary, modern technology has magnified and leveraged the value of knowledge and technical specialization.  The right skills can turn a $500 computer into a six-figure salary or a good bedside manner into a medical career that saves lives.

And America still has its own legacy of racially rationed education to cope with – and a contemporary crisis of class-based exclusion.  Although there are no laws forbidding racial or religious minorities, there are significant financial barriers to entry for those of a lower income lineage.  As education costs have risen faster than inflation, the effect has been to force more and more students into long term debt – a scenario that allows our current aristocrats to stake a future claim on all of the opportunity these young students create.

The resistance to education today is the same as it has always been – exclusion is a means of preserving social imbalance – and we’ve been heading in the wrong direction for far too long now.  The opportunity we gain from sharing information will always be greater than what the comfortable fear they will lose.