While we were out back checking out the air conditioner, we came across a really cool looking critter who had built up a web near our back yard fence.Â  Now normally, I’m not a big fan of spiders.Â  Jacksonville Florida is home to at least a few potentially lethal arachnids – and the black widows and brown recluse spiders are small, quick things that like to live indoors.

But that’s probably also why I like the golden orb weavers – they’re big and slow enough that you can keep an eye on them.Â  They also like to live outside, another big bonus for our ability to coexist peacefully.Â  Anyway, this thing is fascinating. 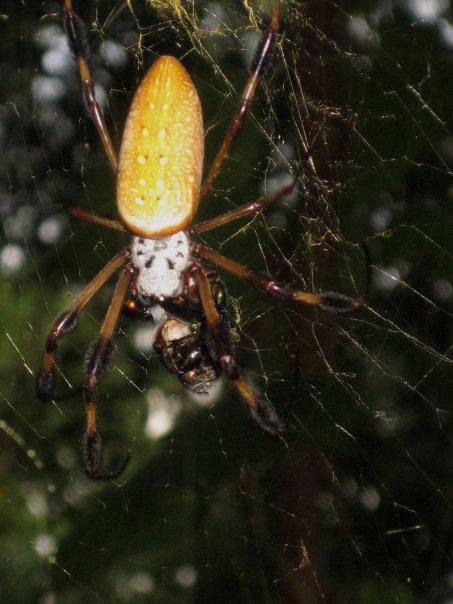 The body is like three or four inches long and the legs obviously extend a lot further than that. 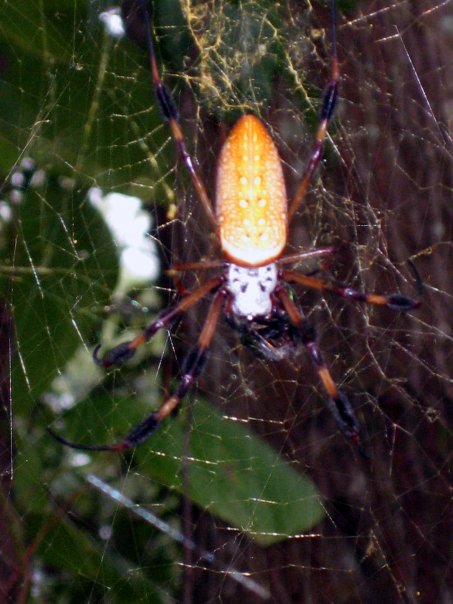 Here the critter is stretching out, and presumably enjoying the late-summer weather.Â  The yellow mess on the web above the spider is actually some leftover mess from her dinner.Â  At any given time, there are a half dozen cocoons of poisoned and melting bugs. 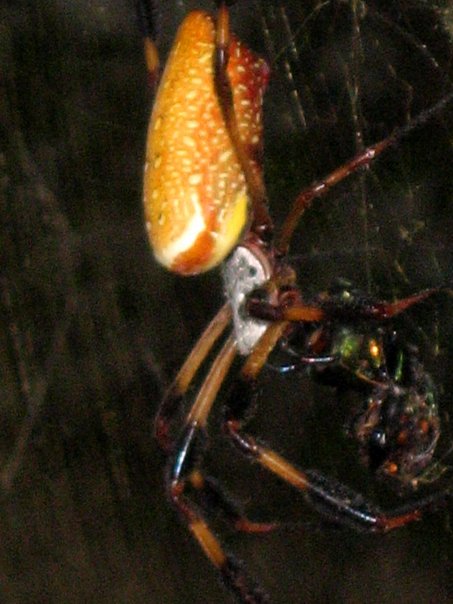 This shot gives some perspective on the weight and substance of this spider.Â  The bright orange/yellow abdomen gives a strong hint as to how much food this thing can consume.

And speaking of food: 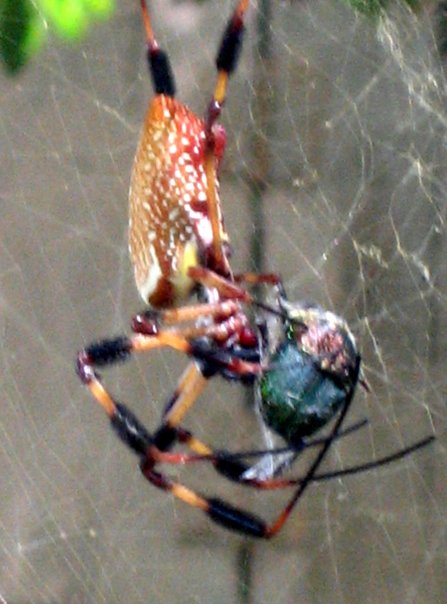 This one is a little blurry, but when this spider springs in to action, it is a twitching and web weaving machine.Â  At this moment, she’s sunk her teeth in to and wrapping up some sort of beetle.

More About the Orb Weaver Spider:

First, you may have noticed I keep calling the spider “she” and “her.”Â  This is definitely the female of species – and the other spiders in the web are so tiny and insignificant that they didn’t seem interesting enough to take a picture of.Â  There are also a few small spiders known to freeload off the orb-weaver’s web, so I’m not even sure which one of the miniatures (if any) is another orb weaver.

And while the orb weaver spider is also poisonous, it is rarely if ever fatal.Â  In fact, the spider’s bite only hurts a human for a day or two.Â  I’m not saying thats a fun thing, but its pretty gentle compared to the more lethal critters around here.

And if you think the spiders in Florida are bad…

This orb weaver was discovered on a golf course in North Carolina and posted to Reddit: And one Australian relative of the orb weaver spider is even making a name for itself because its been seen EATING BIRDS.Â  Yes, a spider eating a freaking bird.Â  Check it out for yourself if you don’t believe me!Â  I kind of still don’t believe it either, but I’m starting to realize how big these things can get.